The post-liberation period is a time of relative retention and destruction of Kapana. On the night of June 13th, 1906, a large fire broke out in the neighborhood, which entirely burnt a large part of the Charshiya. Nikola Alvadjiev writes in Chronicles of Plovdiv, “Not only did the shops burn, but a past that will not be regained.” Among the irretrievably lost architectural values, were a large part of the Kurshum Khan and the Large Bazar. The intensive new restoration of Kapana took place after the WWI, more precisely, between 1920 and 1930.

In the 1920’s, architect Toma Tarpanov created the plans for many of the houses on “Knyaz Bogoridi” Str., “Abadjiiska” Str., and “Zlatarska”Str. The main architects of Kapana during this period were Hristo Peev, Stoyko Stoykov, and Georgi Bachvarov.

The style of architecture for most of the buildings at that time in the area, adhered to the Secession- with some touches of constructivism in the newer buildings – having simpler and clearer lines and details. The first regulation plan of Joseph Schnitter envisioned a new, modern street network, resulting in the loss of some of the characteristic streets, and introducing wider straighter streets, for example “Joakim Gruev st.”, “Georgi Benkovski st.”, and “Bogoridi st.”. The Large Bazar was almost completely destroyed and in 1936 Kurshum Khan was completely demolished, later to be replaced by The Hally (Mall), which partially introduced higher buildings in the district at the expense of reduced vitality.

The neighborhood continued to be colorful with its diverse and rich ethnicity, shaping the north-eastern sector, where the predominantly Armenian settlers were located. However, the new times of the central planning economy and the dominance of state and municipal property led to the depopulation of the neighborhood and its decline. 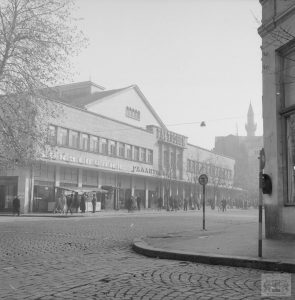 The inhabitants were few and most often stayed in uncomfortable housing estates. There were many deserted buildings as the infrastructure was relatively unfunctional… This process continued until 1970, when after an international contest, it was decided that the old buildings be demolished and a new shopping center (The Hally) be built, by the model of US shopping malls.

A project had been prepared for three modern concrete buildings, similar to The Hally, which were supposed to be connected into a single complex. The process started with the partial confiscation of the buildings, however, due to the lawful procedure and bureaucracy, the process proved to be more time-consuming than expected, which was fortunate for the neighborhood. 1975 came and it was announced by the UN as the “Year for the Protection of Cultural Monuments”, establishing a base for the young creative people in Plovdiv to start an initiative to preserve the identity of the neighborhood.

Each period of time destroyed and added something to Kapana, as it remains essential to the identity, history and cultural heritage of the city. The coming of 1980 brought along a new period of revival for the region as a trade and craft district. The preservation of street networks and the restoration of buildings, allowed the status of the neighborhood to be declared as a “Group Monument of Culture”.

In 1981, a group of architects, designers and artists, under the leadership of Arch. Antoaneta Topalova, took part in the exhibition “For More Beauty in the Living Environment: Synthesis of Architecture with the Plastic Arts”, where they presented a project for the renovation of Kapana turning it into a multifunctional place for culture by preserving its authentic outlook. They pled for preservation of the old buildings, and for a regulation the new ones to be created according the group ensemble style of the old existing ones. The Municipality of Plovdiv ordered an architectural and engineering description of all the street silhouettes of the buildings to be implemented in the district and a new master plan for  Kapana to be created. Аccording to the legislation applicable during the period the purpose and dedication of each building had been decided, plus replacement of unsuitable infrastructure is envisaged, as well as special green system for buildings and the streets. This project had been awarded a silver medal and a prize by the Mayor of Madrid, when it was presented at the World Architecture Biennale in 1985. HERE you can download the architectural team’s design (The description is available only in Bulgarian Language) and GALLERY with the visualization of the project:

But the realization of the project turned out to be time consuming and coincided with the change of the political and economic system in the country with the rehabilitation of the private property and initiatives (after 1989). The restitution, the restored property and the new legislative system in the country stopped the implementation of the project, and the development of the neighborhood was again restrained. Kapana, however, continued to excite with its unique phenomenology and to be a discussion topic in the work of the local governments.
The current status of the neighborhood, according to the decisions of the commission of the National Institute for Immovable Cultural Heritage, is A GROUP MONUMENT OF CULTURE, in which 6 buildings are single monuments of culture with lable LOCAL IMPORTANCE and 108 buildings are in the category IN ENSEMBLE. A detailed description of the committee’s decision can be download from (The description is available only in Bulgarian Language) HERE.

n 1995, the Municipality of Plovdiv won a European project for cooperation with the Republic of France in the field of construction and management of the Кapana district. The main point in the project called “New Scenography of the Street Spaces”, were the public spaces. The team from Plovdiv, lead by architect Topalova, along with a team from the city of Dijon worked on the aesthetics of the neighborhood and the organization of transport, parking, public services, and waste collection. For the first time at a national level, such a project was implemented through an open discussion with the citizens of Plovdiv – a reception room working for 6 months, had invited the residents and guests of the city to share their opinions, while a specialist collected and analyzed the answers, making monthly reports. This led to the formation of specific rules for the construction and management of Kapana, which were then given to the Municipality of Plovdiv. The municipal administration did not implement these specific rules and till this date, on the territory of Plovdiv, the only neighborhood with a special rule regulation system is “Old Plovdiv”.

HERE you can read more about the pilot project /scanned by the magazine/ (The description is available only in Bulgarian Language).